AS Prince William prepares to celebrate his 40th birthday on Tuesday, the future of the British monarchy seems remark-ably secure.

“Elizabeth the Last,” Republicans call the Queen, a mocking title that predicts that the Royal Family are all washed up when Her Majesty’s historic reign is finally over.

But the Platinum Jubilee proved that theory to be wishful thinking.

When the Queen waved to the adoring crowds on The Mall on the final day of the celebrations, she was joined on the balcony of Buckingham Palace by three future monarchs — King Charles III, King William V and King George VII.

One balcony scene containing four sovereigns — it is a scene that is unlikely to ever be repeated.

This pared-down Royal Family’s brief appearance inspired the belief that the future of the monarchy is secure. 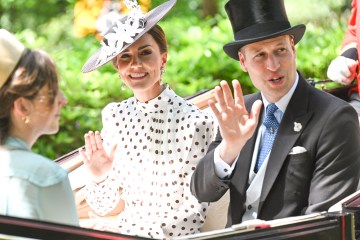 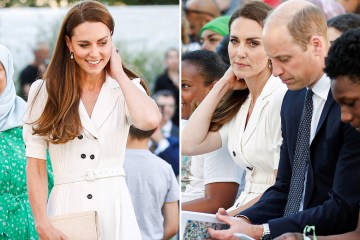 Prince Charles will make a fine King, but he is already 73.

Even if he ascended to the throne tomorrow, he would be knocking on for 100 before he managed to make it to his Silver Jubilee.

And it was not the Queen’s adorable great-grandson, George, just eight years old, who made you think that the monarchy will run and run.

Like the Prince of Wales, young George could conceivably spend a lifetime waiting for his shot at the top job.

No, when you wanted evidence that Queen Elizabeth II’s legacy is secure, the gaze of the nation drifted to the smiling face of Prince William.

We feel that we know William — and we do. We have watched him grow up.

The images of William’s childhood are as familiar to us as our own family album.

We saw his face in the best of times, and in the very worst of times.

Laughing with his mother and brother on that water slide at Thorpe Park.

And — seared into the nation’s consciousness, and the memory of the 2.5billion who watched around the world — the older of the two heartbroken boys who walked behind their mother’s coffin in 1997.

No two royal sons were ever as loved as William and Harry.

But the love was never ­unconditional, as we see in the plummeting popularity of ­William’s kid brother.

Yet as Harry has wantonly squandered the nation’s affections — with his sniping at the royals, with his private jet-flying ­hypocrisy — so regard for ­William has only grown.

Only the Queen herself is more popular than William — and the future Queen Catherine.

Today, the decent family man, the devoted husband and father, the man who would be a king for the 21st Century, is unrecognisable from the young man who partied at Mahiki and Boujis, and was later called “Workshy Wills” when the perception grew that he was not doing enough of the royal chores.

That tag seems unfair now — cruel, even — to a man with a young family who, as a boy, had seen his own family brutally torn apart.

We live in an age where a hereditary monarchy makes no objective sense.

But then you look at the royal birthday boy, it seems infinitely preferable to any alternative.

William has earned his ­country’s love.

At 40, he is his own man, with a tough, stubborn streak behind that big open grin.

The still-boyish charm cloaks a thread of steel and an uncompromising approach when he feels moral lines are crossed.

“The boy’s got a temper!” his stepmother Camilla reportedly gasped with some surprise after her marriage to Charles in 2005.

William can be tough.

When his disgraced uncle, Prince Andrew, wanted to rock up at the Queen’s Order of the Garter celebrations this week, it was said to be William as much as his father who, quite rightly, vetoed the appearance.

When Harry and Meghan were itemising their complaints of ­cruelty and racism to Oprah Winfrey, it was William who revealed the depth of hurt and anger inside the family.

“Is the Royal Family racist, sir?” a reporter shouted at ­William as he left a school in East London.

“We are very much not a racist family,” William replied, his ­features half-hidden behind a face mask, but his anger palpable.

William was born for the job

A naturally gentle man, ­William is slow to lose his rag.

He is more measured than his thin-skinned brother, slower to outbursts of anger.

But when crossed, when confronted by what he considers real injustice, William struggles to keep a lid on his temper.

He tore the BBC apart for its craven, decades-long cover-up over Martin Bashir’s deceitful Panorama interview with Diana.

What William and millions of his future subjects perceive as Harry’s betrayal of those who loved him will not be forgiven easily.

Notably, he spent no private time with Harry ­during the Platinum Jubilee.

The Duke and Duchess of Sussex — still clinging to their titles in that California sunshine — now need the Royal Family far more than the royals need them.

When the brothers were growing up, they were inseparable — in life and in our national ­consciousness.

But it is now clear that the heir and the spare could not be on more different paths.

Harry must keep his American paymasters at Netflix, Spotify and the rest happy.

While William’s life leads to one destination — the Crown.

For all the speculation, in the end the Duke and Duchess of Sussex were easily ignored by the principal players at the ­Platinum Jubilee.

The Queen was reportedly chuffed to meet Harry and Meghan’s baby, Lilibet, but insisted that it was a private meeting — no photographer.

While at the Thanksgiving ­Service at St Paul’s, William and Kate did not even glance at the California contingent.

William increasingly acts as if he is an only child.

The brothers were the most famous double act since Lennon and McCartney.

Like John and Paul, they replaced their boyhood partner with the love of their life.

The future Queen Catherine — as wildly popular as her husband — makes all things possible for him.

Their children — George, Charlotte, seven, and Louis, four — are their adorable, ­constantly spiffy secret weapons. Truly, the importance of these Cambridge kids cannot be underestimated.

Here is a real family and — when Louis was having an eye-rolling sugar rush at the height of the Jubilee celebrations — a family not so different to every other one in the land.

William is a man who has been shaped by the three most important women in his life — his grandmother, his mother and his wife. He has the Queen’s sense of selfless, stoic duty.

He has Diana’s genius for making human connections.

And Kate — that “extraordinary ordinary girl”, as someone once called her — dusts their family with glamour, beauty and a touch that is natural, unforced and heartfelt.

When William went on the streets of London selling the Big Issue without fanfare, bodyguards or a photographer in tow, it echoed the day that Kate appeared unannounced to lay flowers in Clapham Common at a vigil for Sarah Everard, murdered by a member of the Metropolitan Police.

Together, William and Kate have the essence of true stardom, seeming both charismatic but accessible.

Two years and three months older than Harry, William’s experience of the collapse of his ­parents’ marriage was infinitely more brutal.

Extreme youth sheltered Harry from the worst of the pain and damage of his parents’ divorce.

That crucial bit older, William was in the front line, pushing tissues under the door of Diana’s bathroom so his mother could dry her tears.

“My little wise old man,” Diana said of William when he was her most trusted confidant, obliged to grow up fast as his parents’ marriage publicly disintegrated.

In that first year at Eton, 1995-1996, like many a child from a broken home before, ­William increasingly sought solace with his grandparents.

Every Sunday he would have lunch in the Oak Room of ­Windsor Castle, with Prince Philip slipping off to leave the Queen and the teenage future King alone to talk for hours.

It is not too much to suggest that in these Sunday afternoons, the future of the monarchy was secured.

William has learned what is required of him from the woman who has worn the crown longer and better than anyone in ­history.

This summer William and his family move from Kensington Palace to Adelaide Cottage on the estate of Windsor Castle.

The line of succession will not skip a generation.

But when he is King, Charles does not plan to spend as much time in Windsor Castle as the Queen presently does, and so the Cambridges may move into “the big house”.

Preparation for the reign of King William V is already under way.

His relationship with his father has improved as the years have gone by.

They grew closer after Diana’s death when Charles became the concerned single father to two growing boys rather than their mother’s ­wayward husband.

But William’s role model is undeniably his grandmother.

“She cares not for celebrity, that’s for sure,” William said in 2011 of the Queen. “That’s not what the monarchy is about.

And the monarchy is secure because you know he will.

It will not be easy — despite William’s popularity in the polls, despite the widespread affection for Kate and the children.

The world is a far less deferential place than it was when the Queen ascended in 1952.

On a Caribbean tour, he and Kate were obliged to listen politely to local politicians explain why they no longer needed an association with the British Royal Family.

And yet, and yet — William has the common touch that a ­modern monarch needs, the sense of humility, an awareness that, for all the heart-rending trauma in his life, he has also had lucky breaks that are not shared by everyone.

The Queen has spent 70 years showing us the value of a ­monarchy, the great gift of ­having a head of state who is above and beyond the grubby squabbles of political debate, a beloved icon of social stability and national unity in a fragile, ever-changing world.

William was born for the job.

Seeing him out on the street selling the Big Issue, he never looked more like Diana.

So happy 40th birthday, ­William. Your mother would be proud of you.