Steve Cooper has never been afraid to make big calls. But one of his biggest decisions tells a significant story.

In the Championship play-off final at Wembley last month, Nottingham Forest manager Cooper opted to replace striker Sam Surridge — who had done a more than decent job in previous games — in the starting line-up with a fit-again Keinan Davis.

Aston Villa forward Davis had established himself as a key figure in the second half of the season, after joining on loan. And Cooper believed his blend of power, pace and intelligence would make him a vital focal point, at the head of the team, as Forest fought Huddersfield Town for promotion.

And as they prepare for life in the Premier League, thanks to that 1-0 win in north London, those same qualities are viewed as being crucial assets by Cooper as he looks to assemble a side which can compete in the top flight.

The former Swansea City manager remains a big fan of Davis but Forest also believe they have landed an upgrade with the signing of Taiwo Awoniyi.

The Nigeria international has signed a five-year contract following a £17.5 million move from the Bundesliga’s Union Berlin.

That fee makes him comfortably Forest’s record buy, beating the £13.2 million spent on Joao Carvalho in 2018. Liverpool also benefit from a 10 per cent sell-on clause inserted in his £6.5 million permanent move to Union last summer, when he also became the German side’s most expensive ever purchase.

In the 24-year-old, Forest believe they have added a player who can bring even more to the table than the popular, explosive Davis did on his way to scoring five goals in the Championship from January onwards.

Awoniyi is seen as a counter-attacking forward who can hold up the ball in a similar way to Davis, not least because he shares the same kind of robust physical presence. But Awoniyi also runs in behind and is seen as a precise natural finisher. This is something Forest (and specifically fellow front man Lewis Grabban) worked hard with Davis to improve last season.

Brentford were interested in Awoniyi last year, around the time he moved to the Bundesliga from Anfield, and the London club have forged a reputation for being strong talent-spotters. He is also understood to have previously been on Manchester United’s radar.

Borussia Dortmund and RB Leipzig looked at signing Awoniyi too, and it is a positive reflection on Forest that he wanted to join them, even if he also held a desire to prove himself in the Premier League. He had few opportunities during almost six years with Liverpool, when he had seven different loan spells at six clubs in Germany, Belgium and the Netherlands before making a permanent switch to Union last summer.

A look at his shot map below illustrates why he was in demand.

He scored 15 league goals as Union came fifth last season, finishing sixth in the race for the Bundesliga Golden Boot. 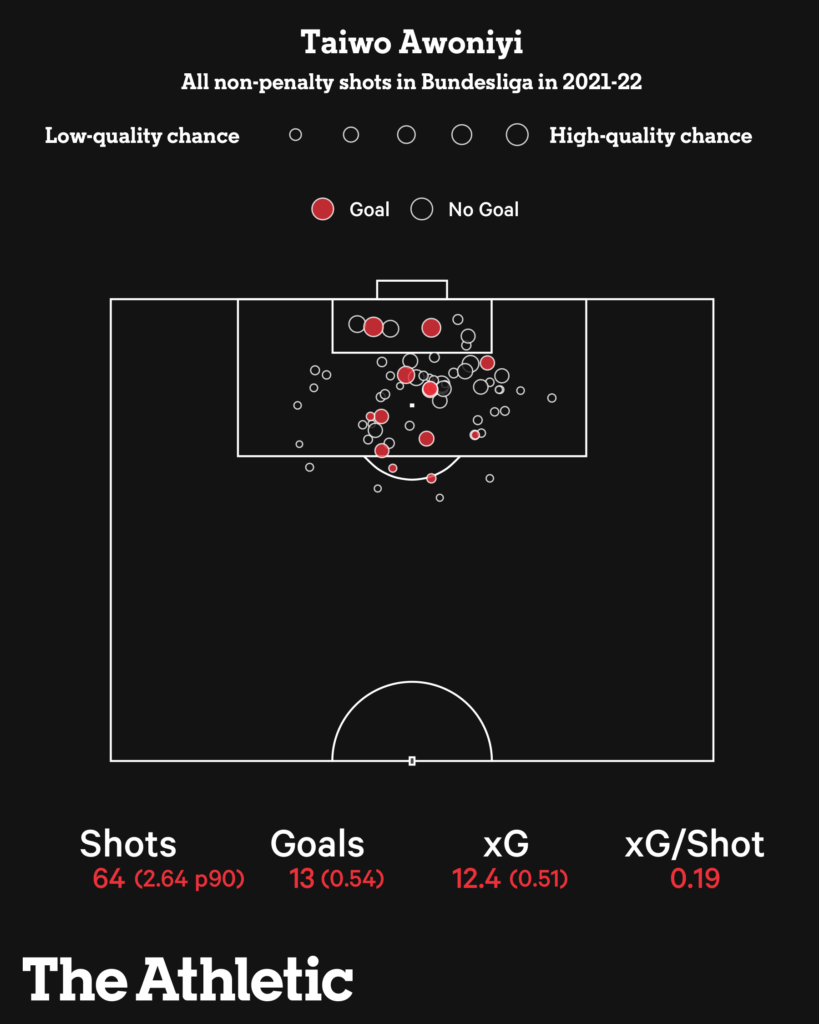 Awoniyi played at the top of a 3-5-2 last season, alongside Sheraldo Becker. He also profited from the creativity of Max Kruse playing behind him, until the veteran forward left in January to join Wolfsburg.

He has thrived in a team without the ball. Union qualified for the Europa League with that fifth-place finish but often play without the ball and do not retain it particularly well. They ranked 14th (with 43.3 per cent) for average possession in the 18-team Bundesliga, and three of the clubs who averaged below that were either relegated or involved in the relegation play-off.

Awoniyi is quick enough, strong enough and has enough movement to suit any team who wish to play in a direct style with transition-based attacks. He is effective when given space to run into but will need to work on his hold-up and link-up play to succeed against opponents who defend deep.

Smarterscout gives players’ games a series of ratings from zero to 99, relating to either how often they perform a given stylistic action (for example, volume of shots per touch), or how effective they are at it (for example, how well they progress the ball upfield) compared with others playing in their position.

As you can see below, Awoniyi has got strong dribbling ability (74 out of 99 for carry and dribble volume) and an eye for through balls for wide forwards running ahead of him, even if his execution of those through balls needs a little work. 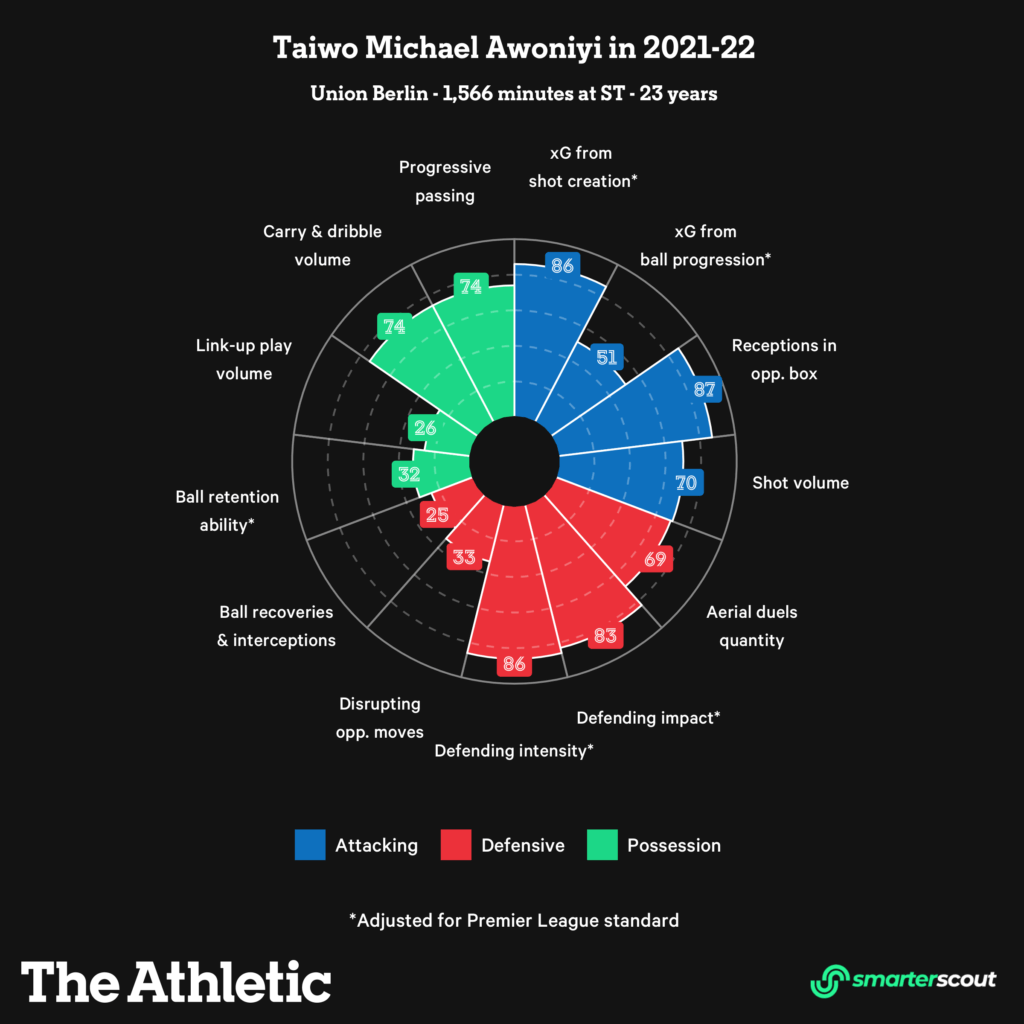 His movement in the penalty area is also good (87 for receptions in the opposition box) while his shot volume is impressive but not greedy (70). He is thick-set, powerful and quick, but those physical abilities are accompaniments to his technical quality rather than predominant strengths.

Awoniyi is an effective goalscorer, even if he does look unorthodox at times. But he can produce moments of flair and creativity as an all-round forward who has as much guile as grit.

A starter in three of Nigeria’s four matches at this year’s Africa Cup of Nations, he is also strong at at pressing. His high scores above for defending intensity and impact suggest a striker who will run and hassle any opposition defender who tries to build from the back.

He gets the angles and timing right and is regarded as a player who is happy to follow instructions.

These qualities are supported by his successful pressure percentage from fbref — defined as the percentage of time that a team gained possession within five seconds of applying the pressure — of 33.1 per cent, which puts him in the 98th percentile among his peers.

Forest may make further additions to their attacking arsenal before they kick off the campaign with a trip to Newcastle United on August 6 but in Awoniyi, they hope they have secured an accomplished striker with room for improvement.

Having led a nomadic existence that took him to FSV Frankfurt, NEC Nijmegen in the Netherlands, Mouscron (twice), Gent and Mainz, Awoniyi spoke of feeling at home after a positive loan move at Union in 2020-21 was made permanent last summer.

“I just need a place to feel welcome, a place to have opportunities,” he told ESPN. “I thank God for the coaches and team for being behind me when it’s not going good, they are still behind you.”

He is beginning to take shots from favourable areas and could one day have the finishing ability to match his movement. The statistics and his development suggest there is a 20-league-goals-a-season striker waiting to emerge here. He needs the right club and the right coach to help him put all of the pieces together.

Forest will hope that they and Cooper will prove to be just that.