BUFFALO, N.Y. (AP) — Residents of northern New York state were digging out Saturday morning from a dangerous lake-effect snowstorm that had dropped more than 6 feet of snow in some areas and caused several deaths.

The Buffalo metro area was hit particularly hard, with some areas south of the city receiving more than 5 feet of snow by early Saturday. According to the National Weather Service, the suburb of Orchard Park, home to the NFL’s Buffalo Bills, reported 77 inches (196 centimeters) by early Saturday. About 80 miles (129 kilometers) northeast of the city, the town of Natural Bridge, near the Fort Drum Army base, reported just under 6 feet.

A Bobcat vehicle clears snowdrifts during a lull in a snowstorm hitting the Buffalo area in Hamburg, New York, Nov. 19, 2022. Photo by Sarah Irwin/Handout via REUTERS 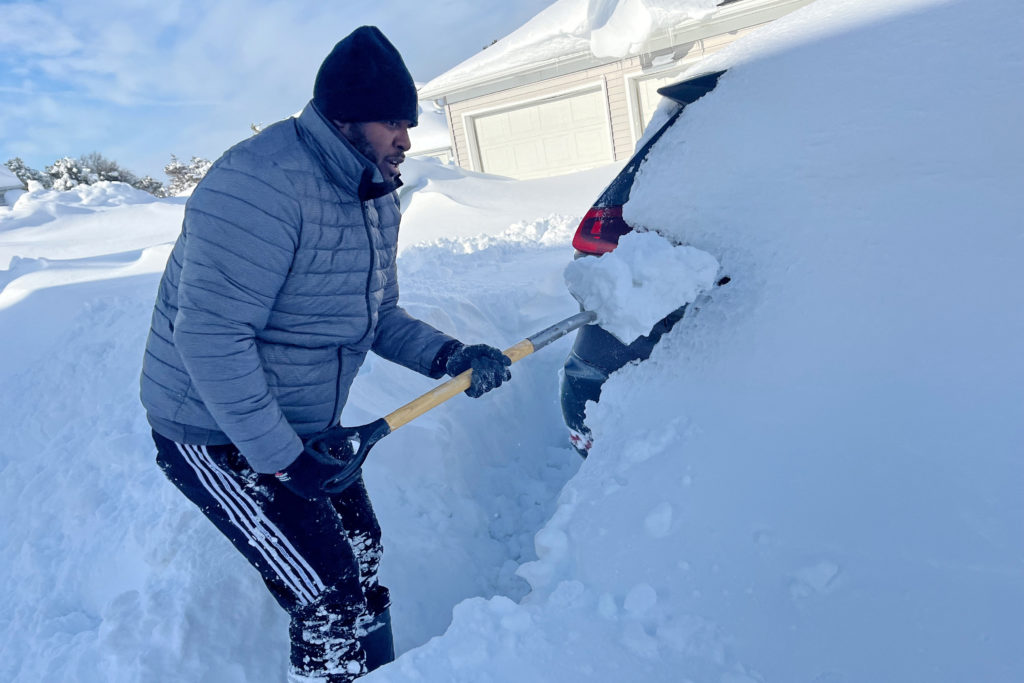 A man shovels a car free from a snowdrift during a lull in a snowstorm hitting the Buffalo area in Hamburg, New York, Nov. 19, 2022. Photo by Sarah Irwin/Handout via REUTERS 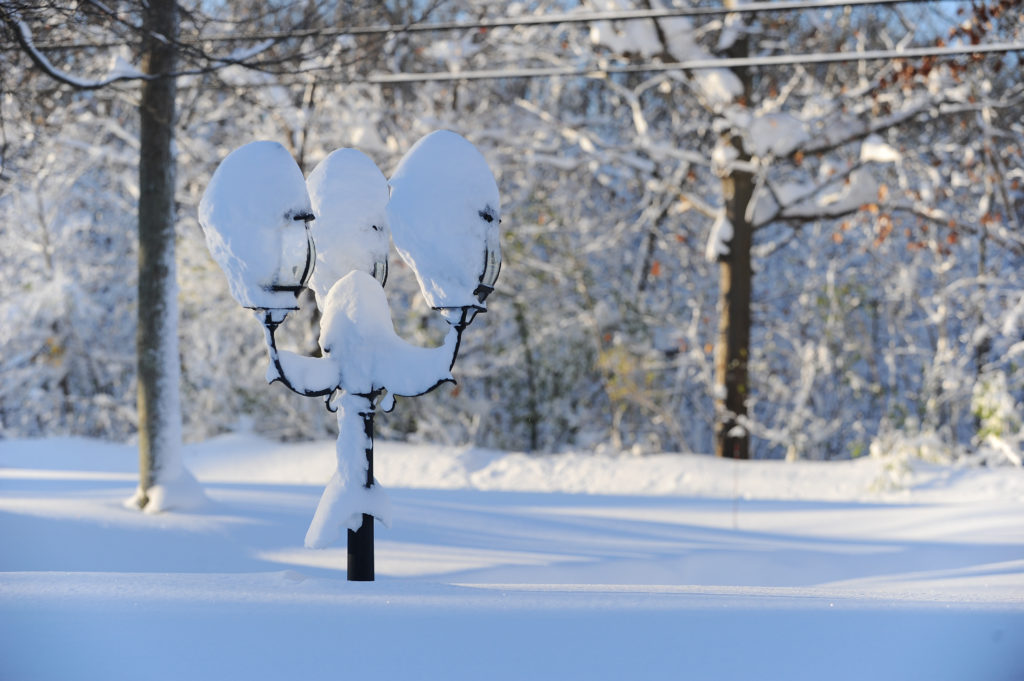 A lamp post protrudes from the snow after an intense lake-effect snowstorm impacted the area on Nov. 19, 2022 in Hamburg, New York. Photo by John Normile/Getty Images

The inundation forced the National Football League to move Sunday’s game between the Bills and Cleveland Browns to Detroit.

The National Weather Service predicted partial sunshine and a break from the snow on Saturday in New York, but not for long.

“Later on this evening and through early next week, we’re expecting another round of lake-effect snow for much of western New York,” National Weather Service meteorologist Zack Taylor told The Associated Press. Taylor, based in College Park, Maryland, said that could produce as much as 15 inches (38 centimeters) of snow for areas near Lake Erie and 2 feet (61 centimeters) for areas near Lake Ontario.

In the Buffalo area, Erie County Executive Mark Poloncarz tweeted that two people died “associated with cardiac events related to exertion during shoveling/snow blowing.” A third person – a snowplow driver in the town of Hamlet, Indiana – was killed Friday when his plow slid off the pavement and rolled over, the Starke County Sheriff’s Department. Hamlet is about 30 miles (48 kilometers) from Lake Michigan. 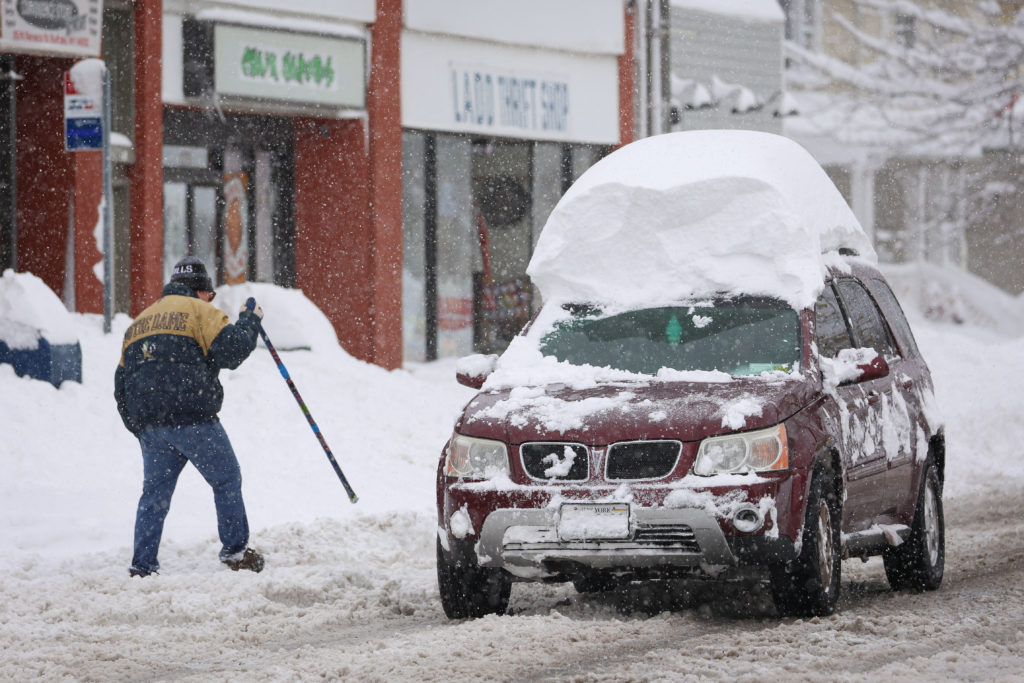 A vehicle drives with snow on the roof during a snowstorm as extreme winter weather hits Buffalo, New York, Nov. 18, 2022. Photo by Lindsay DeDario/REUTERS 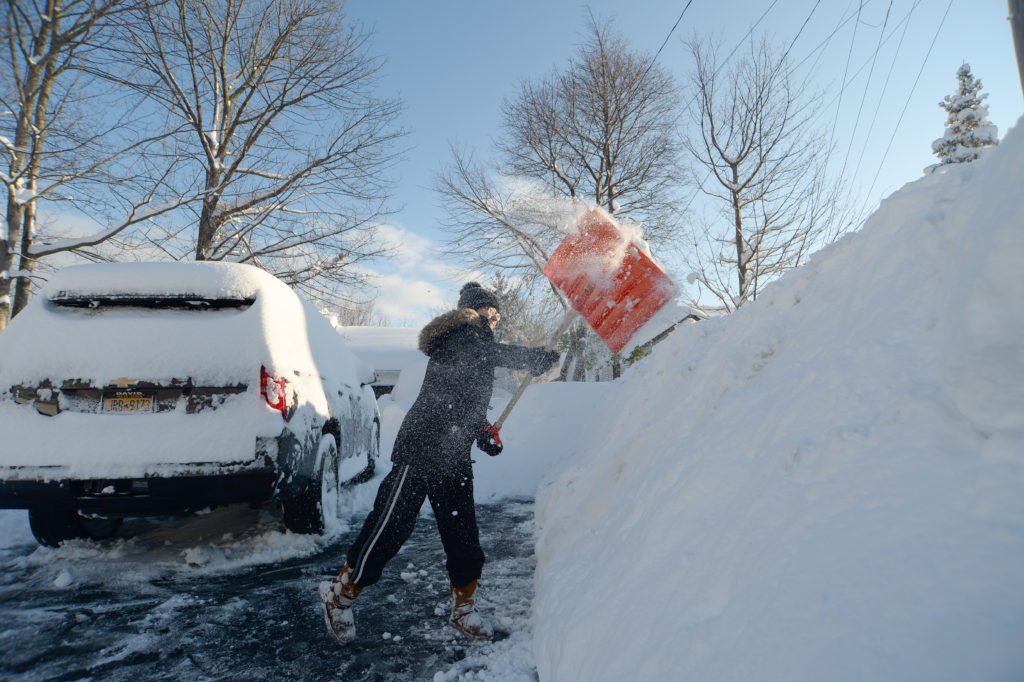 Heather Ahmed digs out after an intense lake-effect snowstorm impacted the area on Nov. 19, 2022 in Hamburg, New York. Photo by John Normile/Getty Images 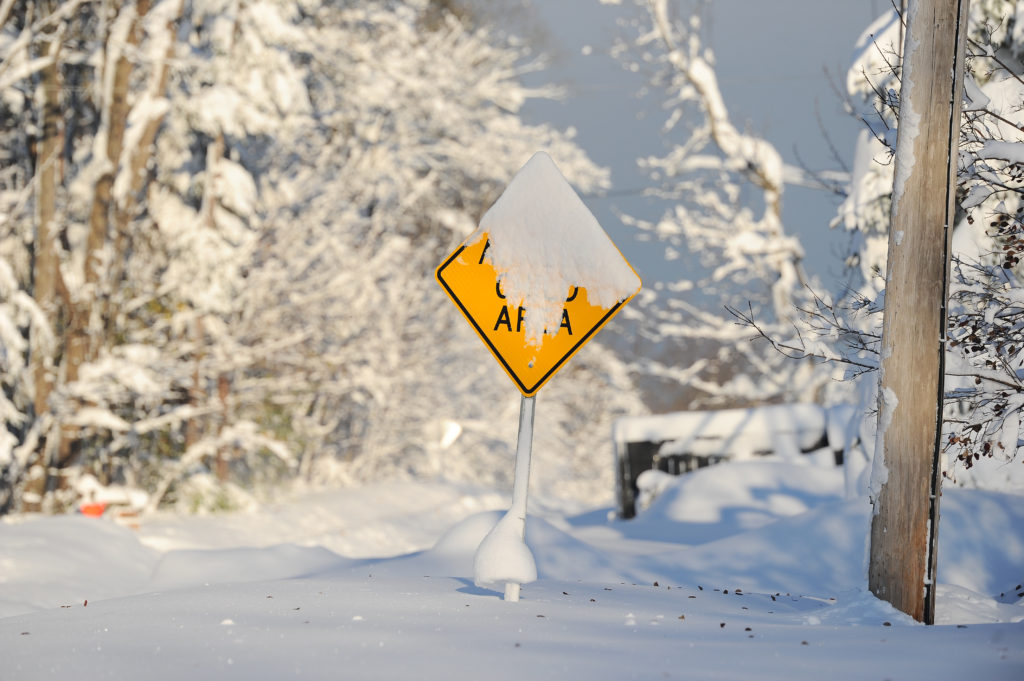 A snow-covered sign protrudes from the snow after an intense lake-effect snowstorm impacted the area on Nov. 19, 2022 in Hamburg, New York. Photo by John Normile/Getty Images

The storm’s effects varied widely in the region due to the peculiarities of lake-effect storms, which are caused by frigid winds picking up moisture from warmer lakes and dumping snow in narrow bands. Some areas of Buffalo were battered by blowing, heavy snow off Lake Erie while mere miles away, residents only had to contend with a few inches.

Gov. Kathy Hochul declared a state of emergency Thursday for parts of western New York, including communities along the eastern ends of Lake Erie and Lake Ontario. The declaration covers 11 counties, with all vehicles banned from a stretch of Interstate 90.

Buffalo has experience with dramatic lake-effect snowstorms, few worse than the one that struck in November 2014. That epic storm dumped 7 feet (2 meters) of snow on some communities over three days, collapsing roofs and trapping motorists in more than 100 vehicles on a lakeside stretch of the New York State Thruway.